Sustainability in the Spirit of Foundation

Sustainability in the Spirit of Foundation

In World War II, a young man looked at the naturally discarded seaweed stretched across the beach of the Boso Peninsula. In an era when Japan was facing terrible difficulties, he declared:“Isn't seaweed a blessing given to Japan? It is a waste to let it rot. Can it not be effectively used?
I would like to contribute to my nation by effectively utilizing the abundant resource of seaweed.”Out of this young man’s inspiration, Kimica was born.

In 1938, Fumio Kasahara returned from the battlefield, a wounded soldier. The military urged him to undergo medical treatment at a private medical treatment facility in Kimitsu District (now Kimitsu City), Chiba Prefecture, toward the warm Boso Peninsula. For Fumio who had grown up in the landlocked Shinshu, he found the coastline that extended in front of him a sight to behold. 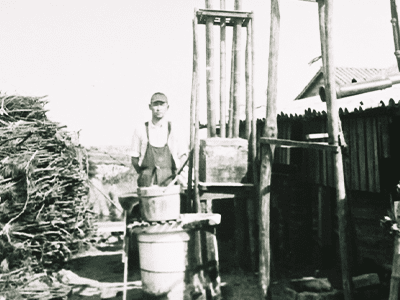 When the war became increasingly severe, Japan suffered from a dire shortage of goods. Juxtaposed against the threat of scarcity, Fumio stared away at the vast amount of seaweed stretching on the beach and began to formulate a plan. His first thought was to extract iodine and potassium from seaweed, believing this would be a key contribution to the nation's procurement strategy. However, as he continued his research, he made the prudent decision to focus instead on the natural dietary fiber in seaweed, "Alginic Acid”. This decision would become the foundation of his success.

In May 1941, a 27-year-old Fumio founded the Kimitsu Chemical Research Institute (now Kimica) to "contribute to society through the effective use of seaweed resources." At that time, there was little literature or data on alginic acid in Japan. Only one person embarked on the unknown rough seas without a compass.
Fumio worked diligently studying "seaweed chemistry" until his death at the age of 71. In his lifetime, he succeeded in industrializing alginic acid acquiring more than 20 alginate-related patents, and both in name and reality, Fumio led the dissemination and development of alginate as a "father of seaweed chemistry." This founding spirit is still inherited by our company. 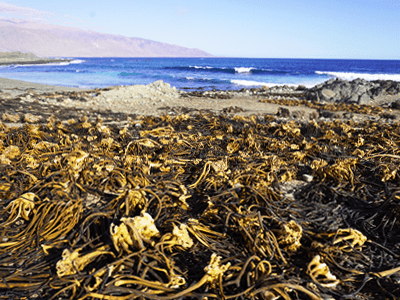 For example, we do not discard algae byproduct after extraction of alginic acid, but use it effectively as feed, fertilizer, and soil conditioner. This is one of the examples that embody the founding spirit of effectively utilizing seaweed resources in its entirety and without waste.
※Currently, harvesting of living seaweed in Chile is prohibited by the marine resource conservation policy. Long before it was forbidden by law, Kimica began using only seaweed naturally discarded on the beach instead of harvesting and destroying the live resource.